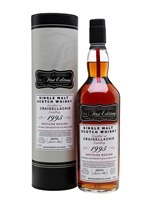 This 1995 Craigellachie has been released as part of Hunter Laing's First Editions series. Aged for 21 years in a sherry butt, this is creamy and full bodied with notes of chocolate-filled croissants and rich fruit.