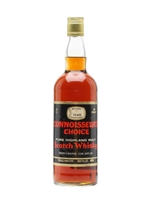 An old bottling of Cragganmore from independent bottler Gordon & MacPhail as part of the Connoisseurs Choice series. Distilled in 1968, it was aged for 11 years before being bottled at the very end of the 1970s.