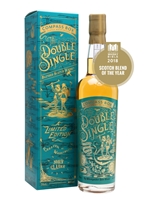 The third release of Compass Box Double Single is a blended whisky made from 72% single malt, a 19-year-old Glen Elgin, and the remainder an older parcel of Girvan single grain. The result is a complex and rich, sweet and vanilla-led whisky that makes both a superb aperitif and after-dinner drink.