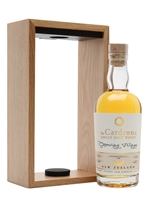 A milestone five-year-old malt from Cardrona on New Zealand’s South Island. This single cask release was drawn from a Bourbon barrel filled during the distillery’s first year of operation. It’s a rich, buttery dram with lots of American oak vanilla on the nose and stewed pears on the palate.