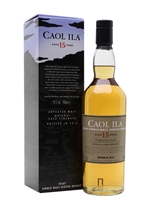 A sherry-forward edition of the yearly Diageo Special Releases unpeated Caol Ila. While whisky from the distillery is usually very smoky, this yearly release looks at the distillery's other, less well-known side: unpeated spirit. The 2018 bottling was matured in refill and rejuvenated American-oak hogsheads and ex-bodega European oak butts, which give a balance of elegant vanilla and orchard fruit, and richer, sherry oak flavour.