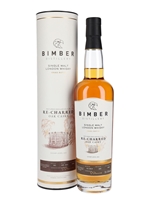 The second-ever single malt whisky released by west London's Bimber distillery has been matured in re-charred American oak casks. The barrels were hand charred by Bimber's own cooper in London, and laid down in 2016, creating a sweet, rich whisky with aromas of orchard fruits, roasted pineapple, honey, nougat and oak, as well as hints of cinnamon and pepper. The palate offers notes of red apples, juicy pears, banana bread, pineapple juice, caramel, butterscotch and vanilla pods, on top of a layer of pepper, ginger and charred oak.