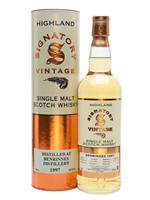 A Signatory bottling of 19-year-old Benrinnes single malt, distilled in 1997. The distillery's whiskies are known for their notes of meat, dried fruit and dark chocolate.