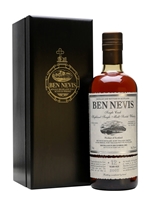 A 2002 vintage distillery bottling of Ben Nevis. Distilled on 9 December, it was aged in a white-port cask for 12 years before being bottled in February 2015. This is a floral and fruity whisky.