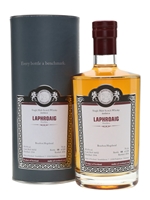 Aged for more than two decades, this 1994 Laphroaig was released by German independent bottler Malts of Scotland in 2016. Matured in a bourbon hogshead, this is a classic example of the distillery's famous medicinal style.