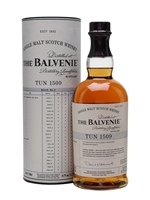 The fourth batch of Balvenie's Tun 1509 series has been aged in a combination of 23 casks. These are then married together, creating a syrupy whisky with notes of malt, honey, dried fruit, cinnamon and ginger.