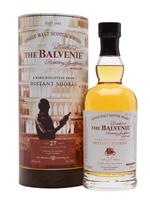 A 27-year-old Balvenie single malt that was discovered by chance by David Stewart from the inventory of travelling salesman John Barret. Rich and indulgent, this whisky has been finished in oak that previously held Caroni rum.