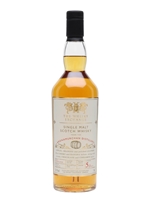 A fruity, smoky 2016 Ardnamurchan single malt from The Whisky Exchange, made with a combination of peated and un-peated whisky, matured in just five casks – three ex-bourbon barrels and two ex-oloroso sherry hogsheads. The nose brings aromas of oranges, apples and leather, followed by notes of rich smoke, bananas, cinnamon and creamy chocolate that build on the palate and linger in the finish.