Inspired by the sea, Douglas Laing’s Rock Oyster is a Small Batch bottling created using our famous Island Malts including those distilled on the the Islands of Jura, Islay, Arran and Orkney.

This vatting is the fourth of their series of blended malts that all follow a regional theme, Big Pete (Islay), Scallywag (Speyside), Timorous Beastie (Highland) and now Rock Oyster (Island).  We will have our tasting notes on this dram over the next couple of weeks.

Below is the official press release: 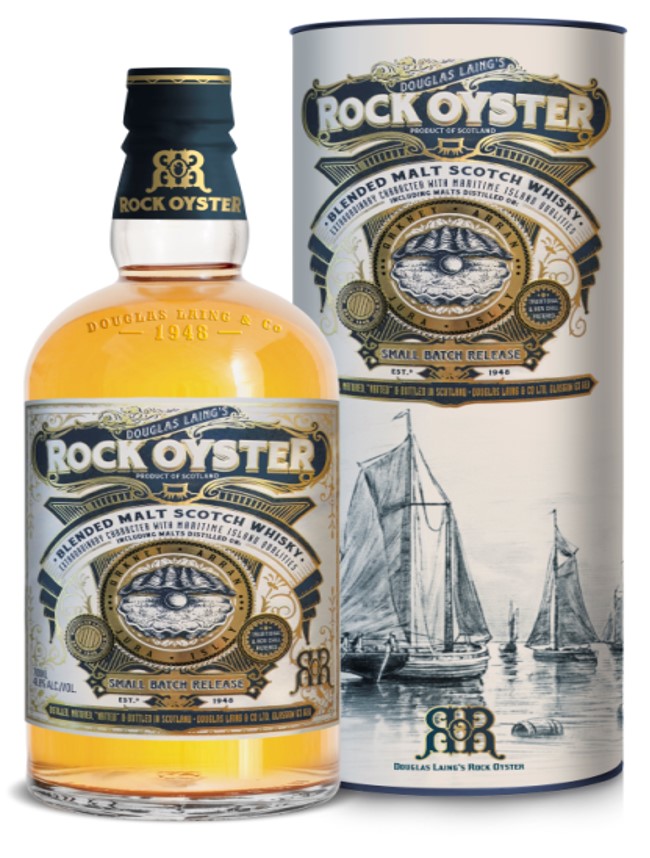 Paying homage the sea, Douglas Laing’s Rock Oyster is a Small Batch bottling created using the finest maritime Malts including those distilled on the rightly esteemed Islands of Jura, Islay, Arran and Orkney.

Prise open a rock oyster and you’ll be lucky indeed to find a pearl. The real treasure though is the hidden, tasty delicacy inside, rich with the flavours of the sea. Bottled at 46.8% alcohol strength and traditionally without colouring or chill-filtration, this Small Batch bottling has a truly maritime and oceanic character of sea-salt, sweet peat, smoke, honey and pepper.

Much attention and consideration was spent creating the packaging which features a bespoke illustration of both an oyster, and a nautical scene, while telling the story of this seafaring spirit.

Says Douglas Laing’s Managing Director Fred Laing: “Rock Oyster showcases the archetypal Island character of gentle peat-smoke, vanilla’d honey and salt. If I could select just one dram to transport the Whisky enthusiast to the Islands of Scotland, it would be this one. Rock Oyster will sit proudly alongside our other core regionally themed Vatted Malts – Big Peat from Islay, Scallywag from Speyside and Timorous Beastie from the Highlands – hopefully contributing to Douglas Laing’s continued growth.”

Douglas Laing’s Rock Oyster will be available from specialist Whisky retailers from January 2015.

Douglas Laing’s Rock Oyster is massively maritime in style and like its namesake carries a hidden delicacy inside. Anticipate wave soaked rocks and a salty oceanic, fresh influence on the nose with a more subtle palate carrying soft and rather sweet peat paralleled with smoke, honey, damp ash, liquorice and late pepper. All that is neatly replicated on the long, more-ish finish.