Yamazaki and Suntory are the winners !!

We at the Whisky Boys are not surprised, we have always enjoyed all the Japanese drams we have tasted especially the Yamazaki’s, so congratulations to all at Suntory and keep up the grand work distilling some of the finest Whiskies in the world.

Suntory Liquors became the first Japanese company to ever clinch the “Supreme Champion Spirit” title with its Suntory Single Malt Whisky Yamazaki 1984 at the 15th International Spirits Challenge (ISC) 2010, an international liquor competition. This coincides simultaneously with another remarkable accomplishment: the naming of Suntory Liquors as “Distiller of the Year”, another first for any Japanese company.
The awards ceremony took place on Monday November 8th in London, UK.

After being announced as a top “Trophy” winner within the “Whiskies” category, Yamazaki 1984 went on to win the Supreme Champion Spirit accolade, an award which is given to only one product among all category “Trophy” winners, and thus stood tallest among the 1000 or so products entered into the ISC. Cited among the reasons for the award was “Yamazaki 1984 has a depth of flavor and maturation, together with a remarkable syrupiness to its texture. It is absolutely outstanding in every respect.”

On top of this, the Distiller of the Year award also received on this occasion is an extremely prestigious honor that is bestowed upon only one distiller that has endeavored to produce a rich array of high-quality products. This is not the first such highly esteemed and significant distinction bestowed upon Suntory Liquors, coming on the heels of the Whisky Distiller of the Year award that was presented in February of this year at Icons of Whisky 2010, itself another first for the Japan liquor industry.

This is a liquor competition held every year in the UK, the very home of Scotch whisky. Products are divided into categories such as “Whiskies” or “Liqueur” and each category has its own Gold, Silver, Bronze and Commended Medal winners, while the Trophy is the top honor awarded to only the most outstanding products from among the Gold Medal winners of each category. The “Supreme Champion Spirit” award is then given to one chosen product from among all the Trophy winners from each category, making it the apotheosis of accolades.

In addition to this, the “Distiller of the Year” award is granted to the one distiller which has endeavored to produce a rich array of high-quality products. 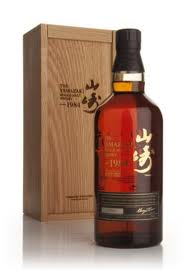 The prizewinners of the “Whiskies” category are determined by unanimous votes by the ten judges who include blenders from whisky distilleries the world over and the prize giving draws the attention of the worldwide liquor industry each year.

The Finest Features of Yamazaki 1984

Only unblended malt whisky distilled and barreled in 1984, when single malt whisky Yamazaki was first released, has been carefully chosen to make this whisky. From among these malt whiskies, the main batch selected for vatting was the malt whisky aged in Mizunara (Japanese oak) casks, which possesses the character that is essential to expressing the uniqueness of Yamazaki. This enables enjoyment of the deep savor offered by the “oriental aroma” so highly regarded by the world as the distinct quality of Japanese whisky.