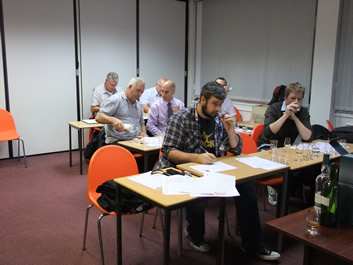 Whisky Trail Course 2011 – hosted by John Lamond. My son in law Scott, husband of Whisky Boy Nicola, is meeting me there.

For the first time on this course we have a full house, all 14 students are in attendance, great chat and Whisky tastings to come.

This weeks topic is Glasses and Their Influence.

We discussed at length how specific glasses could influence not just the nosing of a Whisky but also the taste of Whisky, this was due to the glass design and how it delivered the Whisky on to your palate.

All glasses should have a bowl which narrows to the rim, emphasising the aromas in a smallish area and cutting down on evapouration. Glasses that curve outwards, apparently emphasise the sweetness in the liquid.

The glasses we looked at included: 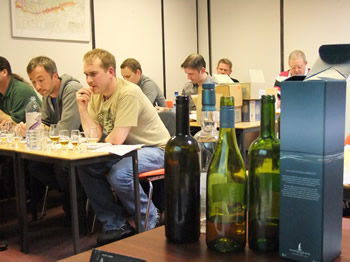 It was good talking about how each glass shape could influence the Whisky being drank from it but we all wanted to know whether this was factual or not. So on we went with our blind tasting, we poured 2 measures from Whisky 1 and Whisky 3 into two different glasses.

Both Scott and myself were amazed at the different aromas each glass provided and you would be willing to bet your house on it that each glass contained a different Whisky. After discussing the infleuence the glass had on the Whisky being tasted, the general feeling was that The Glencairn Glass was the preferred choice of the majority of the students.

We continued with our Blind Tasting which included the following Whiskies:

There were some great Whiskies we tasted again tonight. These Whiskies are available in most supermarkets, specialist Whisky shops and online by using our shop window below.

This again was a great evening of craic and tastings, at one point John Lamond actually put on the main screan an image of  The Whisky Boys new tasting cabin, which is to be called ” Bond. Jim’s Bond” and John our lecturer has been invited to be involed in one of The Whisky Boys special tastings.

Another great evening and and Jim and Scott are looking forward to week 5, see you all there.