Another ‘Unfiltered’ Success for The Scotch Malt Whisky Society

Another ‘Unfiltered’ Success for The Scotch Malt Whisky Society

Glasses were raised at The Scotch Malt Whisky Society this week as it added yet another trophy to its long list of accolades, scooping the Periodical Publishers Association Scotland (PPA) award for Best Magazine Design: Business & Professional. 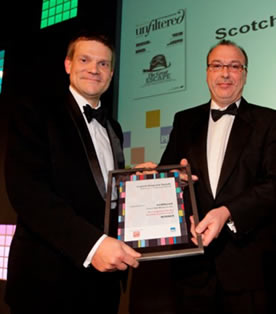 The award went to the Society’s internationally renowned members’ magazine ‘Unfiltered’, and was presented at a gala evening held in Edinburgh. The event was hosted by BBC Scotland’s Cathy MacDonald and was attended by a sell-out audience of almost 400 leading figures from the Scottish magazine industry.

Kai Ivalo, sales and marketing director of The Scotch Malt Whisky Society, comments: “We are thrilled to have won. While we already know how much hard work goes into creating a wonderful magazine, it’s fantastic to hear that other people believe the same.

“As one of the many ways in which we engage with our members, Unfiltered represents the quality that the Society has to offer malt whisky lovers.”

Alan Ramsay, deputy managing director of Connect Communications, which publishes Unfiltered, said: “Unfiltered’s success is a real feather in the cap for our head of design Renny Hutchison, project manager Jim Byers and everyone who contributes to the magazine editorially and creatively.”

Unfiltered provides the Society’s 26,000 members worldwide with an entertaining insight into the world of whisky, with recommendations on the finest drams and curious stories on all things malt