So with the tasting table all set, we began. 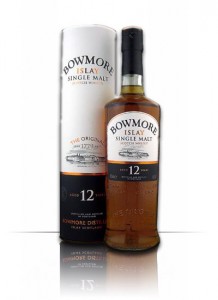 Bowmore Distillery, one of the oldest in Scotland has stood on the shores of Loch Indaal, on the Hebridean Island of Islay, since 1779.

Its close proximity to the sea is vital in determining the final character of Bowmore Islay Single Malt Scotch Whisky, as is the strict adherence to the traditional production methods handed down to Morrison Bowmore Distillers Ltd in 1963, by its four previous owners.

Bowmore Distillery is one of an ever decreasing handful of distilleries to produce its own floor malted barley. The barley is still laboriously hand turned, by the Maltman, using the traditional wooden malt shovel.

Bowmore Islay Single Malt Scotch Whisky is produced using water from the Laggan River from where it gathers the flavours of the rich Islay Peat, the same Peat that fires the Malt drying kiln.

The famous Bowmore Vaults are where Bowmore Islay Single Malt Scotch Whisky spends nearly all of its life resting quietly in the damp cellars below sea level – the Spanish and American Oak Casks into which it is filled, imparting rich and mellow flavours to the maturing whisky.

Everyone that reads this tasting session should without fail go onto the Bowmore website and spend a little time navigating through all the articles, live action, tasting notes, product range and many other very interesting facts about Islay and Bowmore.

Nose…Phenolic with grass and seashore freshness, but with water added it brings forth a citrus bouquet.

Taste…Well rounded richness with spices and more than a hint of smoke and peat.

Finish…Long, delicious with a sweet peat and smoke end.

Taste…Very smooth, warm with a pleasant smoothness thrown in.

Finish…Long and very satisfying, maybe the other two Whisky Boys are right about the smokey Malts.

Again, not only did Islay not disappoint but neither did Bowmore, this wee dram was smooth a full of great flavours, now currently Jim’s new best friend.

The other reason that we chose Bowmore 12 year old is that our local Morrison’s Supermarket in Falkirk, had this malt on special, but alas it did not last long.

The mainly white cardboard tubes that the bottles are supplied in were covered in finger marks and generally not too clean and pristine as one would expect, and the good part of this is that Morrison’s were selling off these bottles for only £16.99 each, Jim and Dougie thought this was a great bargain and placed a half dozen in our trolley as we are sure that they will not go to waste.

As usual when we taste a great wee dram we suggest that you go out and buy a bottle or two and enjoy a fabulous Islay 12 Year Old Malt, well done again to the lads and lassies of Bowmore, keep up the good work.

Now all you readers out there, always tell them the Whisky Boys sent you, enjoy your wee drams.