Hooters Bar – Only if you Want Beer

While visiting very close friends in st clair shores just north of Detroit Mi USA, Bruce decided it was time for me to go and see Hooters Bar.

I was not sure where or what I was going to see, but I duly arrived at Hooters, a detached building with plenty of parking space.  Oddly enough some of the parking bays were cordoned off with bar stools (unusual, I thought).

Bruce and I entered Hooters to hear six of seven lovely girls (dressed in their famous company uniform) shouting “hey guys welcome to Hooters“, and by the way every time someone entered Hooters they were met with the same greeting.  Also on anyone’s departure the were given the cheeriest farewell ,” buy guys thanks for coming to Hooters“.

As you can imagine after sitting for a while this cheerful greeting and goodbye was becoming annoying as some of the girls had very high pitched voices and sounded like some cats being scalded.

Anyway onto my main task “how was the drink and particular the Whisky“.  Well I can now declare that Hooters bar just outside St Clair Shores near Detroit has the poorest selection of Scotch Whisky in the world.  This pub did not have a gantry as we all know, it had a shelf low down behind the bar and their stock of Scotch was a bottle of Dewar’s White Label and a bottle of Johnnie Walker Black Label.

On a positive there was plenty of beer to choose from, bottled and draft, a varied selection of food and there was no shortage of bar girls/waitresses coming along and chatting to you .

Prices for drink and food were reasonable but I just couldn’t get away with their poor selection of Scotch. 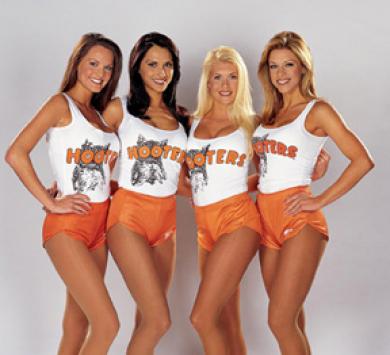 I must admit I would recommend anyone visiting the States to go and visit Hooters (it’s a massive chain and is nationwide, note to self:– there is one in Nottingham, England) however you may not want to stay long, I suppose that may depend on the high pitched tones coming from the bargirls.

As you can see the company uniform is pleasant to the eye.

Oh Nearly Forgot: getting back to the bit about the car park being cordoned off, I asked the question, and the answer was “this area is for the Thursday night bikers who come for a session and this area is allocated for their Harley’s.” I was tempted to return later and see what these guys got up to at Hooters, but could not handle the range of Scotch on offer.

Now if anyone knows of any bar in the world with a smaller selection of Scotch Whisky, please let me know.