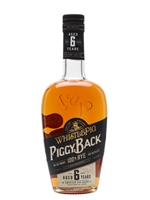 A six-year-old rye whiskey from WhistlePig, PiggyBack is made with 100% rye and matured in American oak barrels for six years before being bottled at 96.56 proof. Aromas of cinnamon, black pepper, grapefruit and tangerine fill the nose, complemented by notes of cocoa, cardamom, leather, nutmeg, cinnamon and vanilla throughout the palate.