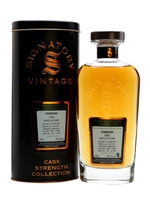 A 1992 vintage Tormore from independent bottler Signatory as part of the Cask Strength Collection. Distilled on 7 April, it was matured in a pair of hogsheads for 24 years. The distillery is known for its malty and fruity whiskies.