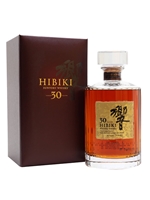 Hibiki is the flagship blend from Suntory, one of Japan's biggest drinks companies. Introduced in the 1970s following the construction of the company's second distillery, Hakushu, (the first being the famous Yamazaki), it has gone on to win a worldwide following and critical acclaim, culminating in the awarding of an International Spirits Competition Trophy four times in five years between 2004-2008.