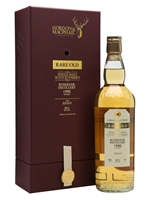 A 1989 vintage Rosebank released by independent bottler Gordon & Macphail as part of their Rare Old series of whiskies in 2015. The distillery closed in 1993 and bottlings are now increasingly sought-after.