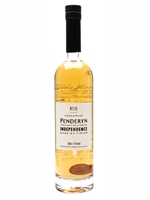 The second release from the 'Icons of Wales' series - with a planned final number of fifty bottlings, this is titled 'Independence'. It commemorates the 1776 signing of the American Declaration of Independence signed by 56 men, of whom Thomas Jefferson and fifteen others had Welsh roots.