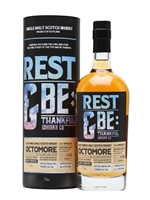 Part of the first batch of releases from The Rest & Be Thankful Whisky Company, owned by Fox Fitzgerald (producers of Peat's Beast). This single cask of heavily peated Octomore was distilled on 19 March 2008 and aged in a ex-Rivesaltes (French sweet wine) cask for six years.