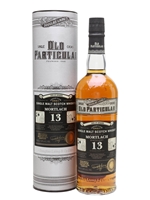 According to bottlers Douglas Laing, who've created this single-cask edition of Pedro Ximenez-aged Mortlach for their Old Particular series, this 'opens with a nose of cinnamon and macerated plums, a burst of rich fruits and nuts on the palate and an "ace" chocolate orange finish'. A winning trick.