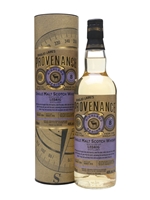 A 2008 vintage Ledaig (peated Tobermory) from independent bottler Douglas Laing as part of the Provenance series. Aged in a refill hogshead, this was bottled in August 2016 at 8 years of age.