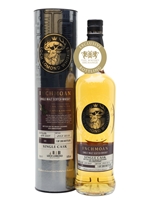 Distilled in April 2007 at Loch Lomond, this Inchmoan single malt has been matured in a single refill hogshead until July 2019 when it was bottled to celebrate our 20th anniversary. Sweet aromas of salted caramel, toffee and vanilla shortbread mingle with medicinal peat smoke and salty sea spray on the nose, and the palate offers notes of lemons, pepper, liquorice, dark berries and dark chocolate, as well as rich, earthy peat.