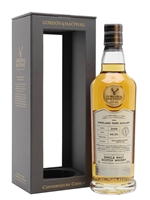 A 2006 Highland Park single malt from indie bottler Gordon & MacPhail, matured in a single refill sherry puncheon for 13 years, before being bottled in February 2020 as part of its Connoisseurs Choice series. Aromas of stewed apples and blackcurrant crumble fill the nose, alongside rich smoke, complemented by notes of strawberry liquorice, dark toffee and cinnamon throughout the palate, with hints of mixed nuts lingering in the finish.