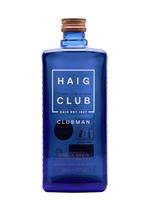 The second release from David Beckham's Haig Club, Clubman is the brand's entry-level bottling. Aged entirely in bourbon casks which give sweetness as well as enticing vanilla and coconut notes, this is designed to be enjoyed with cola.