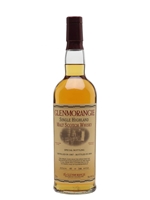 A special commemorative bottling of 1987 vintage Glenmorangie. Just 346 bottles were produced in 2004 to mark the sale of Glenmorangie plc to Moët Hennessy. This bottle is signed by the then-chief-executive of the former company, Paul Neep.