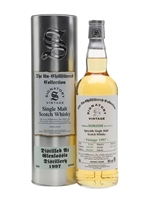 A 20-year-old Glenlossie released as part of Signatory's Un-Chillfiltered Collection. Most of the distillery's production is used for the Haig range of blends, and very little is seen as single malt. This was distilled on 25 February 1997, aged in a pair of hogsheads, and bottled on 9 March 2017.