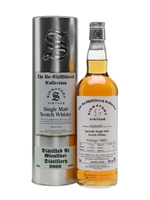 A 2006 vintage Glenlivet from independent bottler Signatory as part of the Un-Chillfiltered Collection. Distilled on 21 November, it was aged in a first-fill sherry butt for 10 years until being bottled on 24 February 2017.