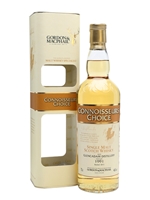 A 1991 vintage Glencadam released by independent bottler Gordon & MacPhail in 2013 as part of the Connoisseurs Choice series. The distillery is known for its fruity whiskies.