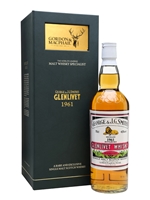 A 1961 vintage bottling of Glenlivet released after more 50 years of maturation in 2012 by independent bottlers Gordon & MacPhail under their historic George & JG Smiths label. This comes at a fraction of the price of official bottlings at this age.