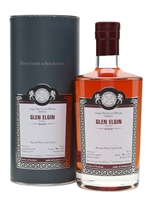 German independent bottler Malts of Scotland is known for its use of unusual finishes. This 2004 Glen Elgin has been finished in a Marsala cask, adding extra layers of richness and fruitiness.