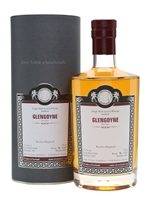 Glengoyne distillery famously sits on the line between the Lowlands and the Highlands. This was distilled in 1997, aged in a bourbon hogshead for around 18 years and bottled by German independent bottler Malts of Scotland in 2015. This is a classic example of the distillery's unpeated style.