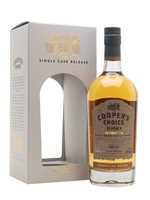 A 1990 Girvan single grain whisky from indie bottler The Vintage Malt Whisky Co, matured in a single bourbon cask for three decades, before being bottled in 2021 as part of its Cooper's Choice series.