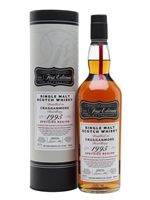 A 1995 Cragganmore single malt from independent bottler Hunter Laing that was matured in a single sherry butt for more than a quarter of a century, before being bottled in 2022 as part of its First Editions series. Aromas of plums, cherries, walnuts, leather and soft baking spices fill the nose, complemented by notes of cinnamon, ginger, dark chocolate-covered raisins and black peppery throughout the palate.