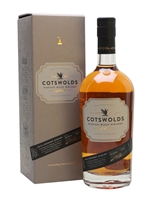 The first single malt ever distilled in England's picturesque Cotswolds, released as a limited edition of 4,000. This is no novice whisky, however, it's a highly enjoyable dram with notes of orange peel, spice, oaky malt and dark sugar.