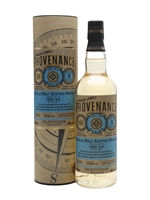 A young independent bottling of Caol Ila from Douglas Laing as part of the Provenance series of bottlings. Distilled in March 2011 and aged for five years in a refill hogshead, this is sweet and smoky with notes of meat, honeycomb and bonfire smoke.