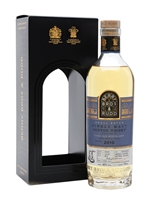 A 2010 small-batch Caol Ila single malt from independent bottler Berry Bros & Rudd that was matured in a handful of hogsheads for 12 years, before being bottled in 2022. Aromas of icing sugar, burnt earth and coastal peat smoke fill the nose, complemented by notes of damp wool, peat smoke, icing sugar, kippers, tar, heather and smoky bonfires throughout the palate.