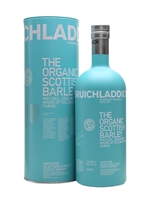 Initially released for travel retail, this release from Bruichladdich is made entirely with organic Scottish-grown barley. Rich in texture with an underlying sweetness and notes of honey, almond and pear.