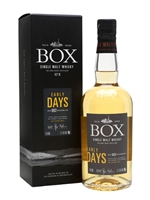 Made with Pilsner malt, of which two-thirds is peated and aged for more than four years, this is the second batch of Early Days from Sweden's Box. Matured in bourbon casks, this is rich and warming with notes of vanilla and smoke.