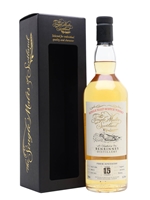 A 2006 Benrinnes single malt from independent bottler Elixir Distillers that was matured in a single hogshead for 15 years, before being bottled in July 2021 as part of its Single Malts of Scotland series. Aromas of waffles and maple syrup, cinnamon, apples and pecans fill the nose, complemented by notes of chewy toffee, lemon drops, caramel, desiccated coconut, garden herbs and warm spice throughout the palate.