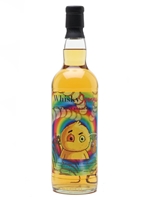 A 1999 Benriach single malt from iconic wordsmith Whisky Sponge, matured in a first-fill bourbon barrel for 21 years before being bottled in 2020. This whisky was deliberately chosen as it represents the eternal and undying conflict between the vanilla-tinged forces of woody darkness and the exotically luscious angels of distillate and light. This cosmic and un-relenting battle for the soul of Whisky Sponge will continue until the heat death of the universe and this bottling perfectly encapsulates that inevitability.