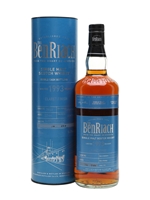 Finished in a Bordeaux-wine hogshead, this 1993 whisky was released as part of Benriach's 13th tranche of single-cask bottlings. This is dark and rich with notes of espresso, sour cherries and black pepper.