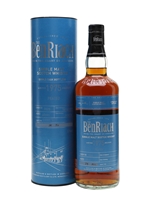 The oldest release in Benriach's 13th batch of single-cask releases, this peated whisky was distilled in 1975 and aged in a sherry butt for 40 years. The result is a whisky with notes of raisins, pear, leather and wood spice.