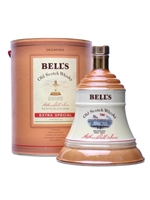 A litre Bells' decanter released in 1994 to commemorate the closing of their Broxburn bottling plant, open since 1968. This contains Bell's Extra Special Old Scotch Whisky.