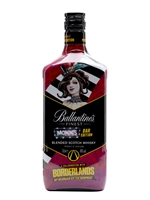 A collaboration between Ballantine's and Gearbox Entertainment's Borderlands franchise, one of the most popular first-person shooter games in the world. This limited-edition Ballantine's Finest champions Borderlands' Mad Moxxi, a bold and daring non-playable character who owns a bar on Pandora - one of the planets in Borderlands. The striking label features Moxxi herself and embodies her colourful style, as well as a QR code that gives fans of the game access to exclusive gameplay skins.