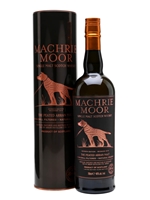 The Autumn 2016 release of the seventh edition in Arran's peated series, Machrie Moor. Lightly peated to 20ppm, this is named after the eponymous peat bog located on the west coast of the island and has proved a popular addition to the distillery's range.